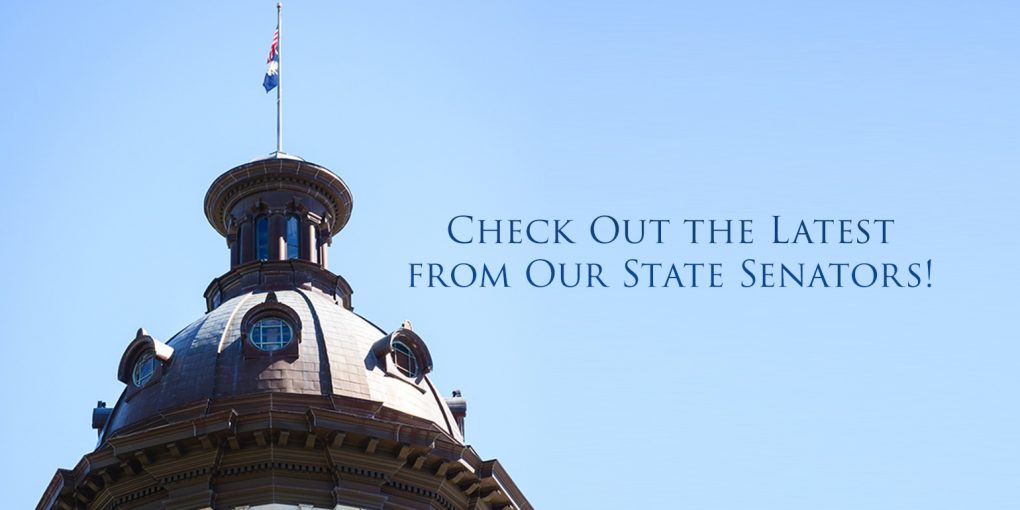 A Letter by Senator Sean Bennett

Spring, Summer, Fall, Winter…and Tax. The five seasons of the year. Or the fifth horseman of the apocalypse. Whichever you prefer.

Either way, the angst of taxes are felt across the board but can no longer be ignored. Our tax policy is an invisible weight around our economic neck.

At the end of last year, I wrote about our broken and antiquated tax system during the debate in the state legislature of whether or not to conform to changes made in the federal tax code.

I said then: “neither blanket conformity nor non-conformity is the answer as both result in negative impacts to South Carolina income tax payers…let’s not let this moment pass us by. Let’s do right by the taxpayers and finally pass a broad-based, pro-growth tax policy that is the best fit for all of South Carolina.”

I am pleased to say that the Senate, House and Governor worked together on a conformity bill that was forward-looking, fair and protected our most vulnerable in the state. Perfect? Far from it, but it did avoid the negative impacts from carte blanche conformity.

But our work is far from over. I have been fighting for years to reform the old, outdated state tax code to a new plan that provides real opportunity for middle-class earners, lifts up our working poor, allows our local companies to be more competitive in our global economy, and provides for real educational opportunities for our students.

I was selected to co-chair a special Senate committee tasked with conducting a comprehensive assessment of our state’s tax policy. Over the last few months, we have held hearings and received testimony from some of the nation’s foremost experts in economics and taxation. The findings are clear — our tax base is narrow and eroding further every day. It is unfair in that it creates disparities among taxpayers. It does not promote growth. And it is unsustainable.

That said, we are closer than we have been in decades to improving our tax system. The House of Representatives has joined the Senate in a call for sweeping tax reform, and the governor too has made it a priority.

In fact, Governor McMaster made reference to it thirteen times in his State of the State Address.

It must be fair, equitable, and predictable. It must enhance economic growth for all and align with the modern economy. It must be broad based with a low burden.

It starts with the income tax where 41 percent of taxpayers pay the state’s highest tax rate of 7 percent, while 42 percent pay nothing at all.

To compound this problem, the rate “kicks-in” at individuals making just $14,861 a year, harming those who can least afford it most. Let me be clear, SC has the highest marginal tax rate in the southeast and 12th highest in the nation.

But income tax reform alone will not produce the necessary results. We must also change the way we apply sales taxes and the grossly unequal, and often punitive, property tax system. A system where a single property can be subject to three different levels of taxation.

We can do better for working families.

Often forgot in the discussion of tax reform is the vital impact it has on the state’s education policy. Tax reform and education funding go hand-in-hand. We are missing the mark if we try to tackle one without the other.

Education funding — particularly for fast-growing districts — is most harmed not by inadequate funding but by improper distribution of resources. Current tax and education funding formulas make it nearly impossible to correct those inequities. Therefore, a commitment to real educational change can only be accomplished with accompanying bold fiscal improvements.

I will continue to advocate for a tax system that is transparent and easily understood, reform that controls the growth and expansion of government while insuring reliable funding of core government functions, security for the basic needs of the state and lifts up the working families who are harmed most from our current structure, and a system that limits new revenue to be used as a baseline for future spending — a shell game that governments often use to camouflage unnecessary spending increases.

Partnership is priority. Providing a high-quality education creates a vibrant, high-skilled workforce for our businesses and industries; a strong workforce means more jobs, better quality of life and opportunities for all; and a targeted, fair tax system creates a climate that foster new jobs, better opportunities and a South Carolina for which we can be proud.

Elected in 2013, Sean Bennett represents portions of Dorchester, Berkeley and Charleston counties in the South Carolina State Senate. In addition to serving as co-chairman of the Senate Finance Taxation System Review and Reform Subcommittee, he chairs the Senate Ethics Committee.

This letter was featured in an edition of the Berkeley Independent on March 13, 2019.